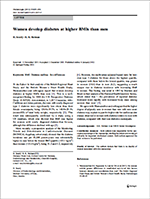 In an analysis of the British Regional Heart Study and the British Women´s Heart Health Study, Wannamethee and colleagues report that women develop diabetes at higher BMIs than men.

This is, however, a well-recognised finding demonstrated in 1988 by the UK Prospective Diabetes Study (UKPDS), and later confirmed by a study using a US database.

In a letter published in Diabetologia, we agree with Wannamethee and colleagues that the higher degree of adiposity seen in women than men with new-onset diabetes may explain in part the higher risk for cardiovascular disease observed in women with diabetes relative to men with diabetes, compared with their non-diabetic counterparts.