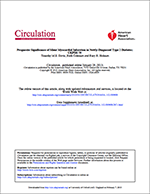 Research published online this week by DTU and Australian researchers has found that one in six people with newly-diagnosed type 2 diabetes may have experienced a silent myocardial infarction (SMI) - a heart attack without chest pain or symptoms - in the past.

Published in the journal Circulation, the study examined data from 1,967 people with type 2 diabetes who enrolled in the landmark 30-year UK Prospective Diabetes Study (UKPDS). Nearly 17% of these people showed evidence that they may have had a SMI in the past, as revealed by an electrocardiogram, or ECG.

To read the full paper, visit: