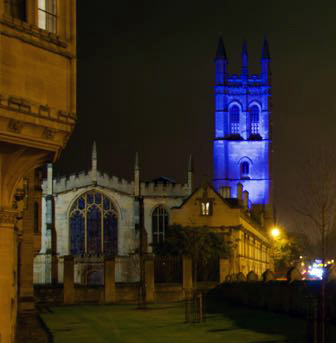 Clinicians and researchers are preparing to light Oxford's Magdalen Tower blue to mark World Diabetes Day - and have invited patients and visitors to then learn more at an open day about the condition at the Churchill Hospital.

The tower at Magdalen College in High Street will follow in the footsteps of other landmarks including Elizabeth Tower (known informally as Big Ben) and Sydney Opera House by turning blue between 4.30pm and 10pm on Monday, November 14, World Diabetes Day.

It is the first time an Oxford building has been lit to mark World Diabetes Day, an official United Nations Day led by the International Diabetes Federation.

This year's World Diabetes Day will focus on promoting the importance of screening to ensure early diagnosis of type 2 diabetes and treatment to reduce the risk of serious complications.

The tower will be lit thanks to a collaboration between Magdalen College, part of the University of Oxford, and researchers at The Oxford Centre for Diabetes, Endocrinology and Metabolism (OCDEM) at the Churchill Hospital.

Magdalen College Home Bursar Mark Blandford-Baker said: “Magdalen is delighted to be able to support this Awareness Campaign for World Diabetes Day and in doing so highlight the excellent research work going on in Oxford, including the work of an alumnus of the College, Dr Rustam Rea.”

An open day, “Eyes on Diabetes: Research and Innovation”, will be held at OCDEM on Friday, November 18 to showcase the centre's cutting edge work

The event, from 2pm to 6pm, will include interactive stalls with the opportunity to meet scientists, nurses and doctors.

The centre brings together the University of Oxford and Oxford University Hospitals NHS Foundation Trust to care for patients with diabetes and conduct research into the condition.

Its main funders include the NIHR Oxford Biomedical Research Centre, a collaboration between the University and Trust.
Staff from the centre will talk about issues including why people develop diabetes, advances in care, new treatments and the role of genetic research.

Prof Fredrik Karpe, Head of OCDEM, will give a talk at 4pm on “Apples or Pears” that will look at the different types of body fat and their association with diabetes risk. This research recently featured on BBC Two's “Trust Me I'm A Doctor”.

Visitors will also be able to learn about opportunities to take part in research, such as advising researchers on priorities and taking part in trials.

Dr Garry Tan, consultant physician and clinical lead at OCDEM, said: “There is lots which can be done, from prevention of diabetes through to new medications for both type 1 and type 2 diabetes, all of which should be underpinned by education and support to enable people to live well with their diabetes.

“World Diabetes Day is a day when millions of people around the world come together to raise awareness of diabetes and what it's really like to live with the condition.

“Oxford is one of the leading centres in the world for research into diabetes, and we will be opening our doors to people to come and find out what is happening about diabetes in Oxfordshire.”

Among those who have taken part in studies is Cuddesdon's Peter Smith, 67, who has been taking medication for Type 2 diabetes for more than 30 years.

He was diagnosed after suffering a heart attack and is taking part in the HARMONY Outcomes Trial, which gives participants either a drug called albiglutide or a 'dummy' placebo drug to determine its effectiveness at lowering blood glucose.

Participants who have a previous history of cardiovascular disease and whose blood sugar levels are difficult to control with their current treatment are eligible to take part. The study - sponsored by GlaxoSmithKline Research & Development Limited - involves him injecting the drug once a week.

Mr Smith said: “It was important to take part because the study covered almost exactly my condition.

“It is a kind of payback. It just seems like not a lot to ask to give something back to medical research. I felt that if nobody ever took part in anything then nothing would ever advance.”