Glycaemic control after addition of sulphonylurea to metformin 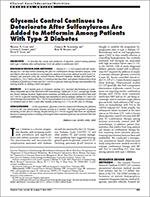 OBJECTIVE— To describe the course and predictors of glycemic control among patients with type 2 diabetes after sulfonylureas (SUs) are added to metformin (MF).

RESEARCH DESIGN AND METHODS— Patients (n 2,220) treated with MF monotherapy for 90 days before initiating MF plus SU combination therapy between January 1998 and March 2004 were studied in a retrospective analysis of electronic medical records from U.K. primary care practices using the General Practice Research Database. Median glycoslyated hemoglobin A1c (A1C) before and after SU initiation was described, and patient characteristics were evaluated as predictors of time until A1C 8.0% or glucose-lowering therapy was intensified (by starting insulin or adding a third oral agent).

RESULTS— At 6 months post-SU initiation, median A1C resumed deteriorating at a somewhat comparable rate to that observed onMFmonotherapy. Higher pre-SU A1C, younger age, female sex, shorter diabetes duration, higher serum creatinine, and being an ex-smoker predicted time until A1C 8.0% or glucose-lowering therapy was intensified in various analyses. Median A1C was 9.5% when therapy was intensified. A1C 8.0% was estimated to occur in 85% of patients 4 years after SU initiation and in 68% 4 years after initially achieving A1C 7% on MF plus SU therapy.

CONCLUSIONS— In this population, glycemic control is improved following the addition of SUs to MF, but deterioration resumes as early as 6 months. The high proportion of patients remaining on MF plus SU therapy despite having A1C 8.0% suggests that there are significant barriers to starting insulin or adding a third agent when treatment goals are not achieved with this combination